Out last stop in Australia was Melbourne, a lovely city on the South East coast, a quick flight from Sydney.

I was getting pretty excited about visiting Melbourne as we had arranged to stay with a friend of mine I hadn’t seen in nearly a decade. (Wow, that makes me feel really old.) We were planning to meet up with my friend, Victoria, and her family and head to nearby Phillip Island to relax a bit.

Before meeting up with Vic, we checked out some of the scenes in Melbourne. Personally, I liked Melbourne a lot because it was so “green.” I don’t mean in the environmentally friends sense, although it may be, but that it was literally very green with beautiful flowers everywhere and Gardens to walk around in for hours.

We started with the Royal Botanic Gardens, which was just a short walk from our hotel. We could literally have gotten lost there and enjoyed the colors the whole time. We wandered around and checked out the huge variety of plant species. Everything is nicely labeled, which is awesome so you can know just what are looking at and finding some cool facts out. There are gazebos everywhere for relaxing while taking in the scenery. All around awesome place.

I would be remiss if I didn’t mention Griffin’s favorite bird of all time, which we found in Melbourne, the Cassowary. We like to call it the Dino Bird because of the oddly shaped crest on the top of its head that looks prehistoric in our minds, if to no one else. Anyway, Griffin has become obsessed with this bird.

After checking out the garden for a while, we stopped in the nearby Shrine of Remembrance, a military museum detailing Australia’s journey to freedom and contributions to world wars. It’s a solemn place of remembrance and touched our hearts even as foreign visitors. The place also boasts a pretty amazing architectural feat, which can be seen in the Sanctuary. A sunken stone plaque which reads, “Greater love hath no man” is read by the visitors in such a way that they much bow their heads to read it. The quote is part of the Bible verse, John 15:13, which states, “Greater love hath no man than this, that a man lay down his life for his friends.” Every year on November 11th at exactly 11:00am, the sun shines through a open block in the roof and lands directly on the word “Love.” Daylight savings time has caused the necessity of a mirror to be placed to continue to tradition, but it is no less powerful. During the rest of the year, visitors can enjoy a simulation.

Finally we were ready to meet up with Vic’s husband, Chris, for the ride down to Phillip Island. I was happy to see my friend again and meet her sweet family. We had a great time catching up. As it turned out, we also got to meet Chris’ parents and Victoria’s parents as well, which was a blessing to us.

Vic and Chris offered lots of advice for things to see around the island, so we started with the Phillip Island Wildlife Park. This place is getting up close and personal with all kinds of animals and we loved every minute of it. We got to pet Kangaroos, Wallabies, and Emus and saw Koalas, Eagles, and so many more animals I can’t even think of them all. Basically, I didn’t want to leave there and tried to talk Griffin into letting me have a Kangaroo to take home. He said no. =( 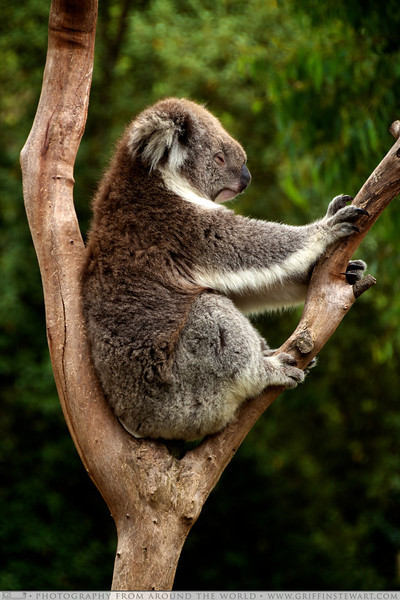 We took an extended family trip with all ten of us to The Nobbies, a nature park with one of the most beautiful coastal walkways I’ve ever seen. There is a small island off the coast with hundreds of seals sunbathing, which we enjoyed seeing as well.

Finally, we had to do it, we went to the Penguin Parade. This is a natural phenomenon that occurs nearly every evening at the same time, when hundreds of penguins arrive on shore after a day of fishing and waddle to their beach homes. These are not just any penguins, though, they are “Fairy Penguins,” tiny little fuzzy penguins that stand about 12 inches tall. They are some of the cutest things you’ve ever seen. People have been coming to watch the penguins come home since the 1920’s and it’s still extremely popular. I tried to talk Griffin into letting me have a penguin to take home. He said no. =(

After a few days of seeing the sites on Phillip Island, we tagged along to Vic and Chris’ home back in Melbourne and had a great time hanging out and playing with her cute kids. From there, we booked a rushed flight to continue our journey in New Zealand!

If your in the area, I can’t recommend beautiful Melbourne or Phillip Island highly enough!

Getting a Taste of Korea

Travel Photo Of The Week: Ceremony By The Ganges – Varanasi, India